The First Association on our Lake:

September 12, 1980, our first Board of Directors of the original Poisson Blanc Lake Association:

by COBALI (in french): historique

Origin of the name «de la Lièvre» the main source of our watershed. Article is in french, please use Google Translate:

The Lièvre River is a major waterway, which was central to the area’s development. It empties into the Outaouais River in Masson Angers. It is part of a watershed covering 9000 km2, which is one of Quebec’s largest watersheds in the southern part of the province. The Poisson Blanc reservoir is connected to it.

The name of the Lièvre River comes from the Algonquin nation who used to fish and hunt in and around it. This river played a major role is opening up the area and colonization by acting as a highway. The forestry industry used the river by going upstream and logging, then sending the logs back down the river. Forestry farms popped up along the river to provide for the workers, which explains where farming started here and the territory’s occupation. Small villages eventually popped up near these farms as early settlers came to live. Today, the river continues to play an important role economically. Farming is suitable given the river, there are two hydroelectric dams in the northern section (including Rapides-des-Cèdres), part of the recreational tourism industry (outfitters, Regional Park, etc), there are a number of hobbies (fishing with over 20 species of fish including brook trout, swimming, boating, plenty of scenery, etc. Fun fact: 10000 inhabitants of Ferme Neuve and Mont-Laurier get their water from the Lièvre River. The water quality is considered good. We need to protect it, as well as the smaller waterways connected to it.

A newspaper article concerning the early years on Mystery Island (Île mystérieuse). Were there cars going there? Mysterious Island Articles

Photos from the Bowman sector

From unknown sources:
Billy had come up to lake Poisson-Blanc sometime before 1871 and around the turn of the century he built & rented several tourist cabins.
In 1962, two men from Poltimore – Emile Boisvert & Henry Buckland – went through the ice in the bay and drowned.
Unfortunately during the winter of 2009, this historic cabin burnt down. The property is now owned by Billy’s Great-Grand Nephew.
Billy’s brother was Rodney Smith who owned the property where the Base de plein-air Air-Eau-Bois is located today. Newton Bay in the Citizen

Our lake was featured in the Ottawa Citizen, in the City section detailing a long battle to get the name of one of the main bays changed.

While some of you may already know this, others probably aren’t aware of an official name change on one of the most popular bays on the lake. Formerly known as “Baie a la Vase”, or “Mud Bay”, the bay is now known as “Newton Bay” in respect to Betty Newton and her family who were the first settlers on the lake.

Elizabeth Newton, who is somewhat of a celebrity around the bay because of how long her family has been maintaining the land, helping lost campers and directing people to cottages they can’t find, is the great granddaughter of the original settler on the lake, that came from Buckingham. His name was Arnold Newton and he first settled in the area sometime in the mid-19th century.

Why the bay was originally called “Mud Bay” is a little bit a mystery. Nobody can figure out where this came from except that the first recorded name was in 1981 on a field survey that was conducted in and around the lake.

Elizabeth thought this name made no sense, and over 200 people who signed her petition agreed with her. The petition was submitted to the municipality and they agreed to change the name of the bay officially.

How did all of this come about? Early in the 19th century, Elizabeth’s great-grandfather sent his two sons, who weren’t even 21 years old yet, on a wild adventure up the Rivière La Lièvre to stake out some potential property that was coming up in a land grant. In those days, in order for the colonization office to grant any acreage the settlers first had five years to clear the land and then establish themselves. After this time they could apply for a patent, which would give them the full title to the land. If those conditions weren’t met, then the land would revert back to the colonization office. Poisson Blanc was one such property.

According to Newton family stories, the two sons who originally staked out the land were too young to file it a claim for themselves. Their father decided to help them out by getting the deed in his name. Back then, there wasn’t as much infrastructure around the area, just a number of small hamlets. One such hamlet was Ryanville, which the two boys stumbled upon. Ryanville is now the area surrounding the ski hill Mont Ste Marie, and no longer exists except for in story. This is where Bill Newton established himself, while his brother – Elizabeth’s grandfather – established himself on around 800 acres of land close to Newton Bay. This eventually became known as Whitefish, and has stuck ever since.

One of the questions overheard quite frequently up at the lake is “Is it Whitefish Lake, or Poisson Blanc lake?”

The straight answer is that under the government, since 1931 it’s been known as “Lac du Poisson Blanc”. However when speaking to old folks, it’s commonly referred as both – Old English people tend to call it Whitefish Lake, while French speaking people call it Lac du Poisson Blanc. Different names are common with some lakes in the MRC Vallée de la Gatineau, please refer to a official government map.

The Newton family is not only known for renaming the bay, in the early 1950’s Elizabeth Gertrude donated an acre of land to be used for a church, Notre-Dame-Du-Lac du Grand Poisson Blanc, which held summer services for campers and cottagers until 1973. Not to mention, nearly a century after her ancestors created the hamlet and settled there, Elizabeth Muriel Newton was instrumental in bringing electricity to this part of the lake, which had previously relied only on propane for heat and lighting.

Send to us by our members (Carla, Ron & George)

Renewal of the Contract for the Post Office at Kelly Newton. This Post Office served 3 local sawmills that were in business during that era. (The Gobeil Sawmill, the Matt Kelly Sawmill, and the Walter Newton Sawmill). This Post Office was discontinued in 1956. As well as my Grandfather’s signature, there appears the signatures of Albert Paré and his brother Emile Paré. Anyone else remember them?

This is actually in what is now known as Newton Bay. George’s old cottage is across the bay on the right side, but barely visible. This photo predates 1954, the chapel was built in 1948, and had the small addition built on the rear of it a few years later. Grampa built the cottage in May of 1945. It was. Once you turned onto the road to Lac Sainte-Marie from old Route 11 (now Route 105) the pavement ended and a dusty road trip began. Once we reached the lake, we crossed by boat to reach our final destination (the cottage). It was in 2003 that cottagers were able to drive to the cottage by car on ch de la Solitude. Info by George Mellean 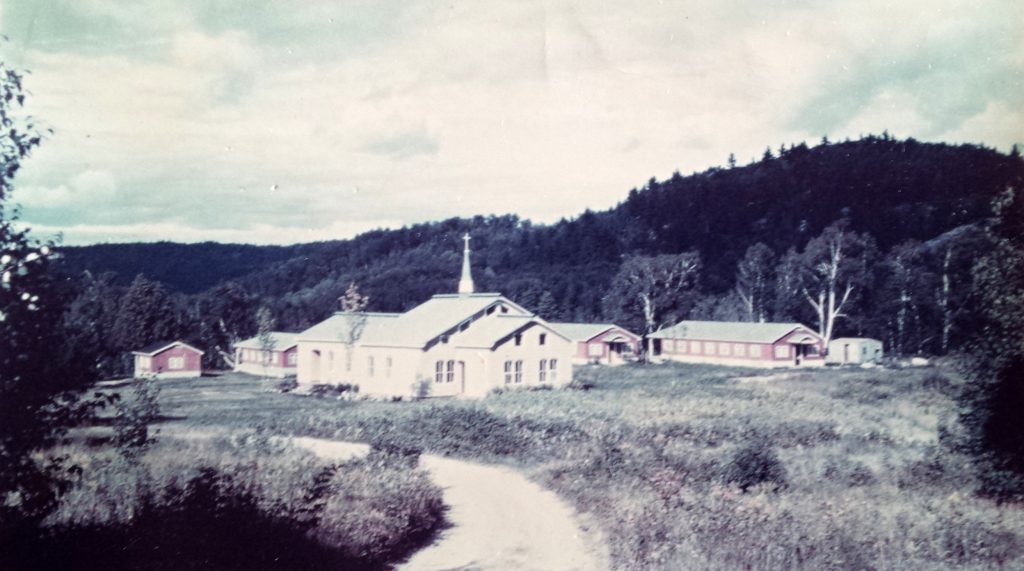 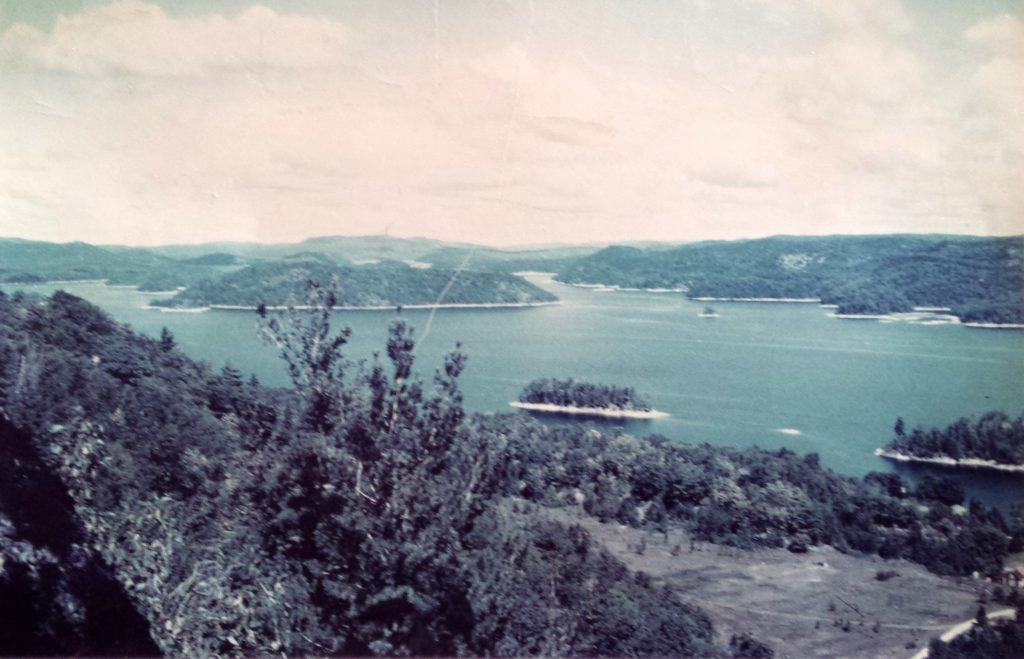 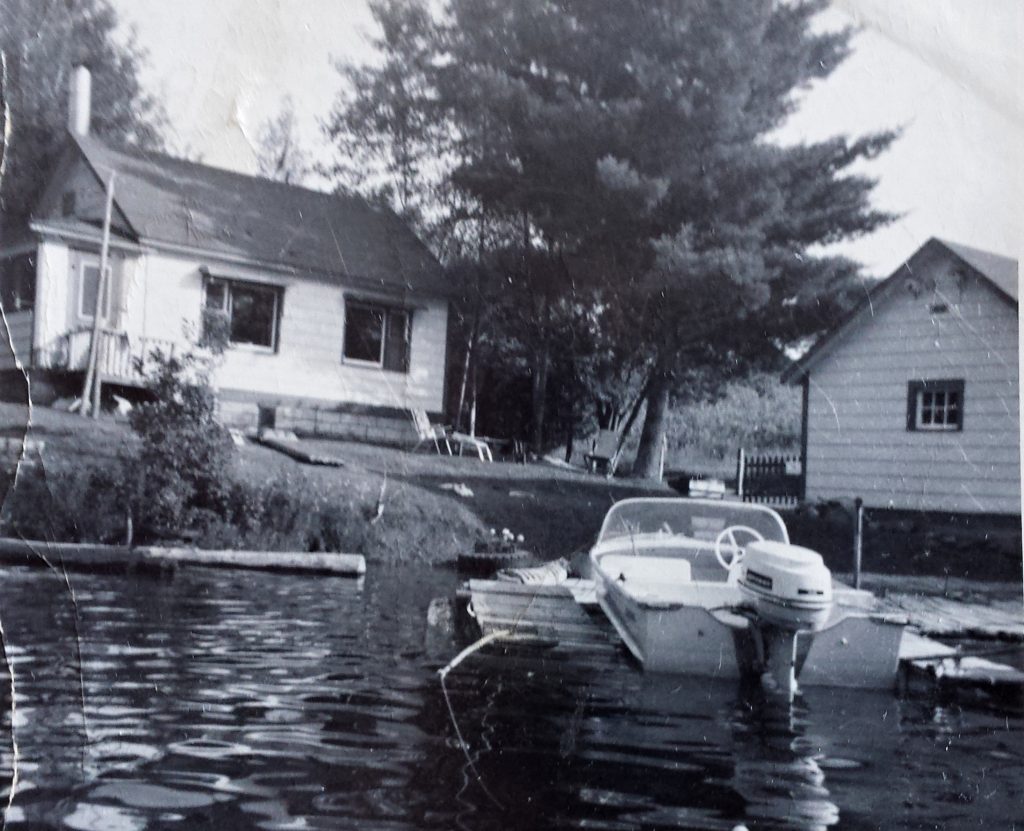 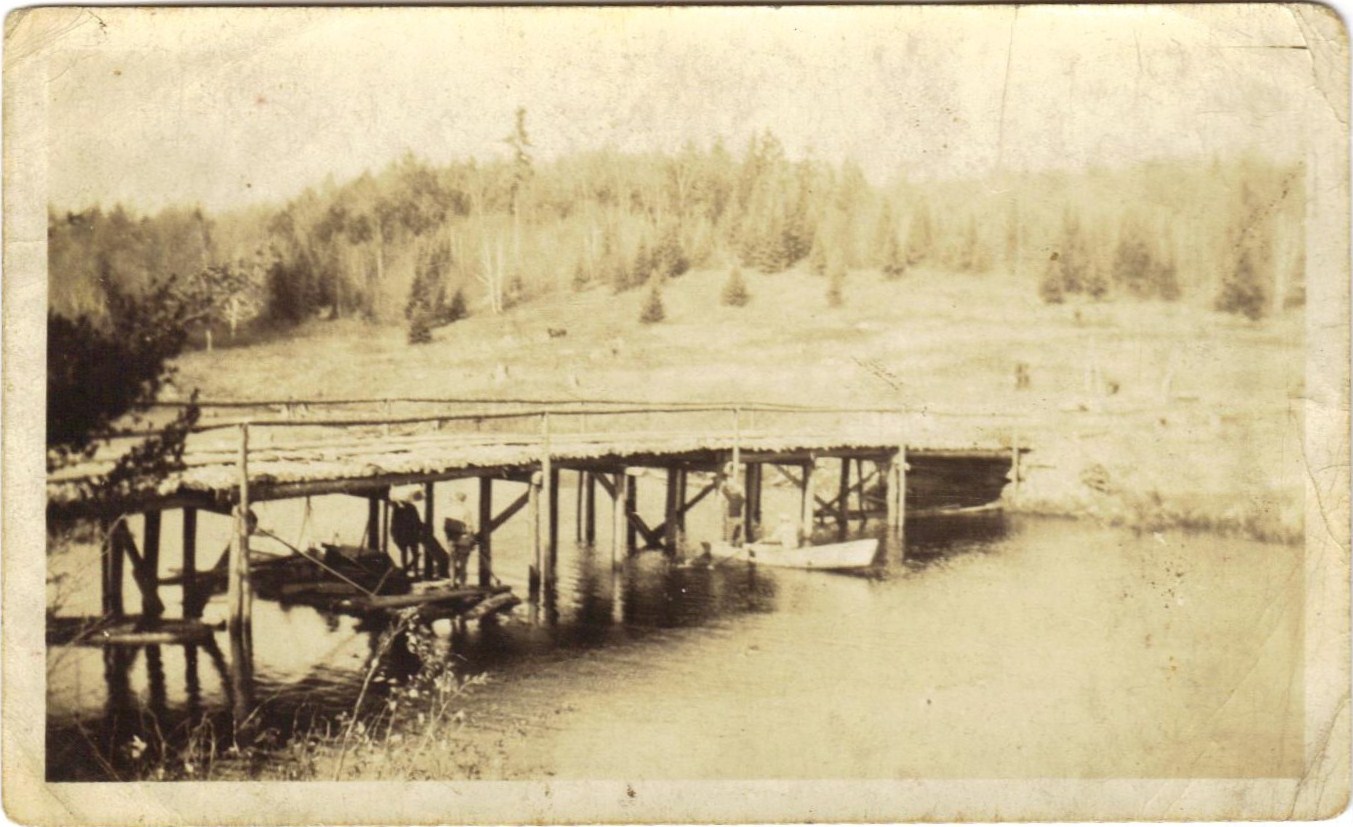 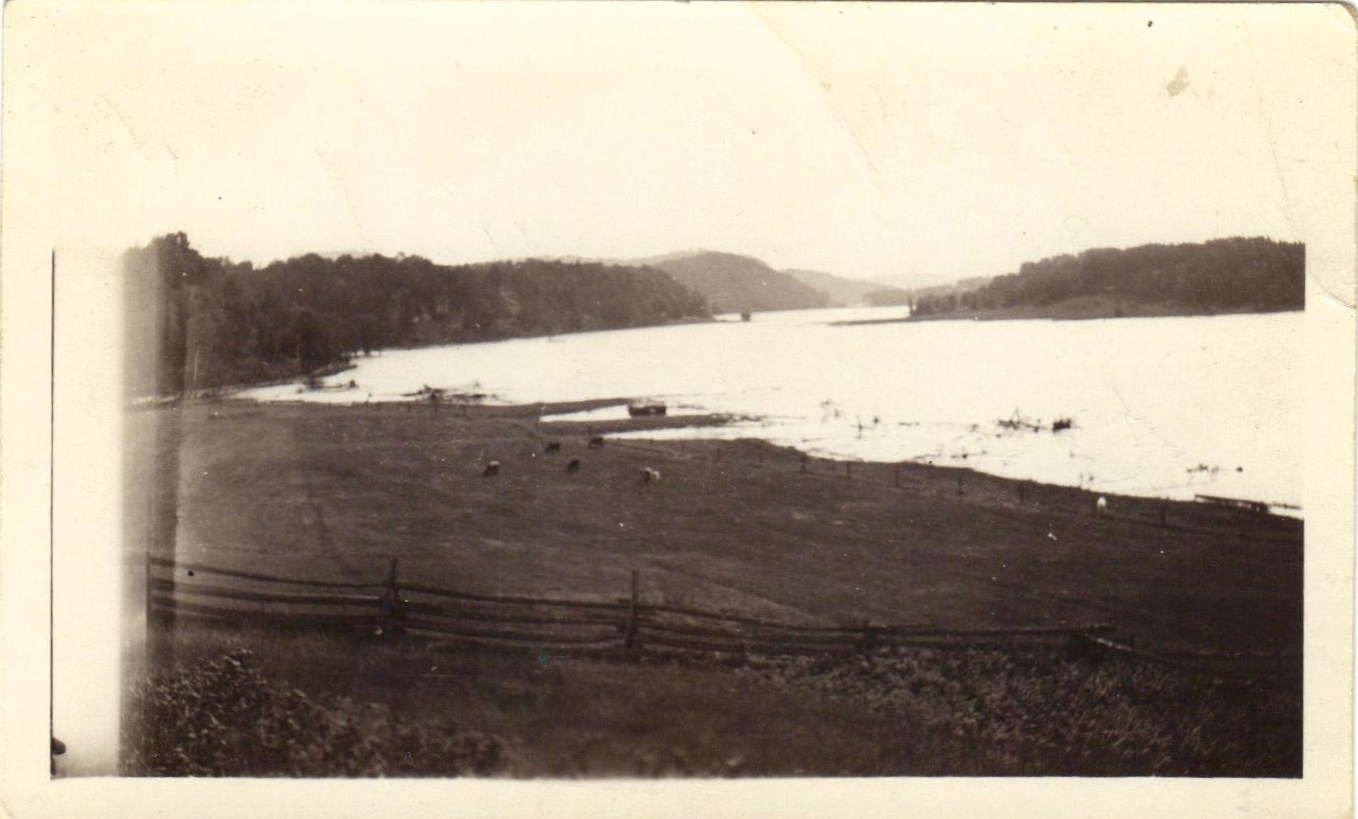 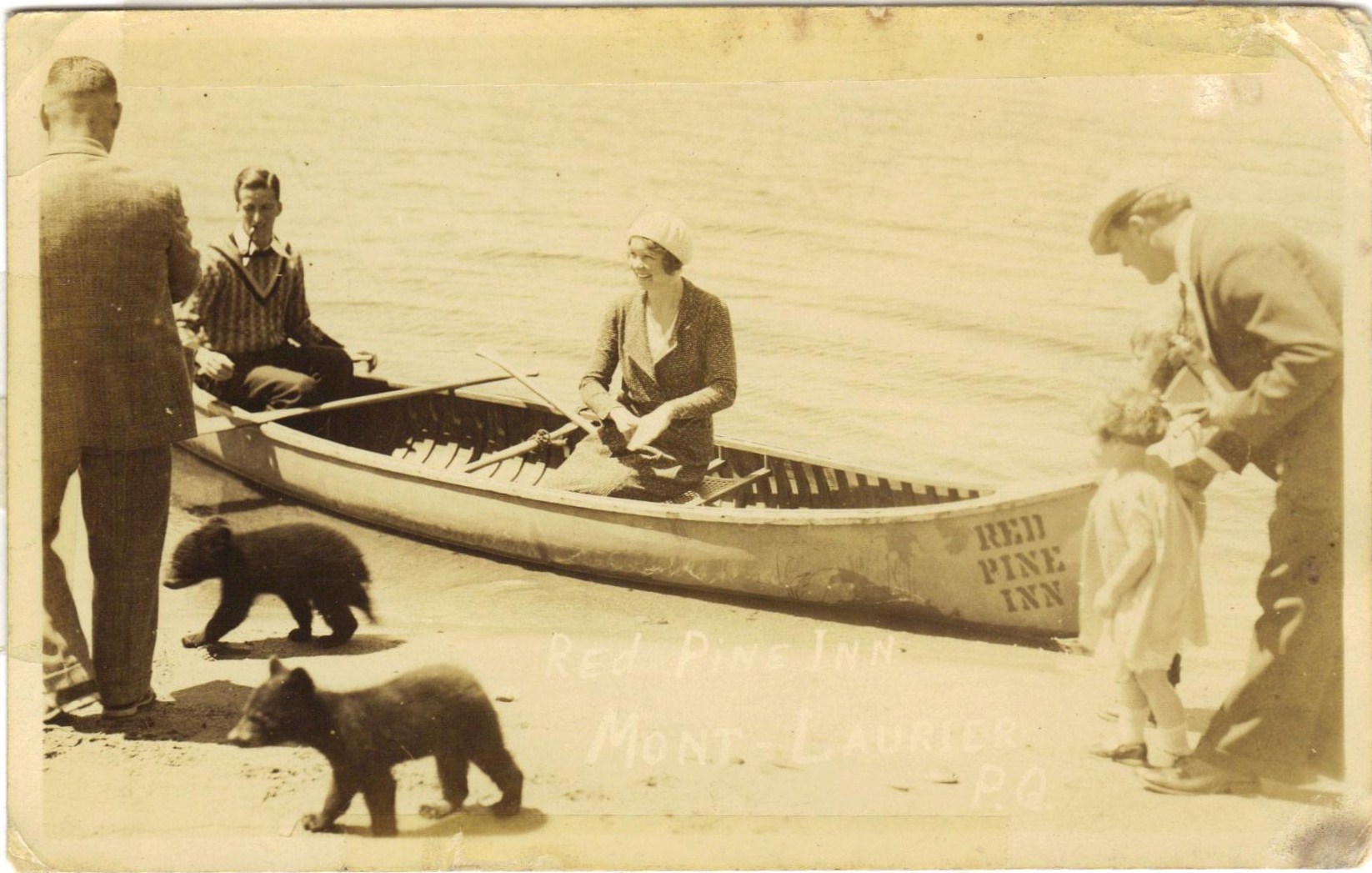 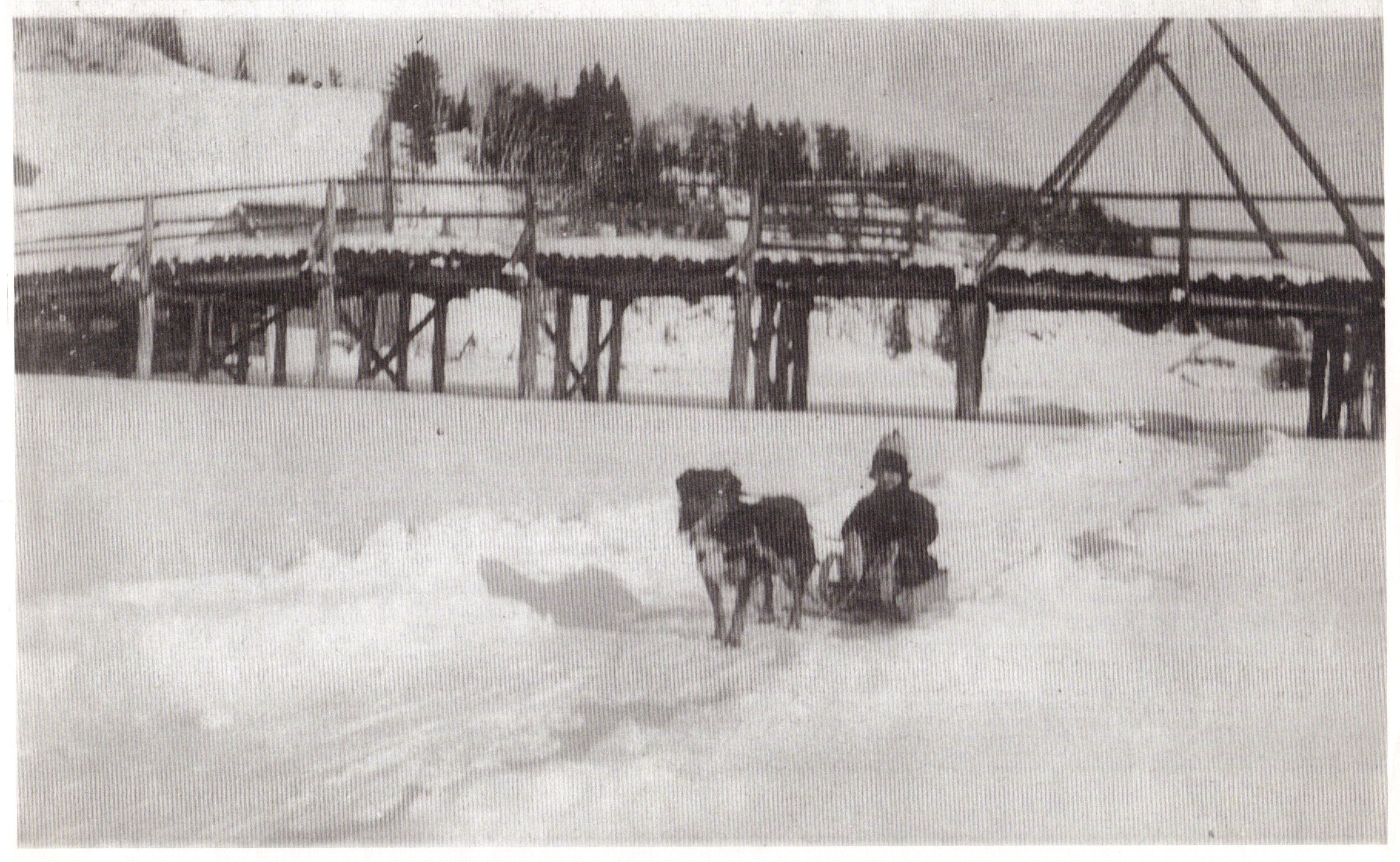 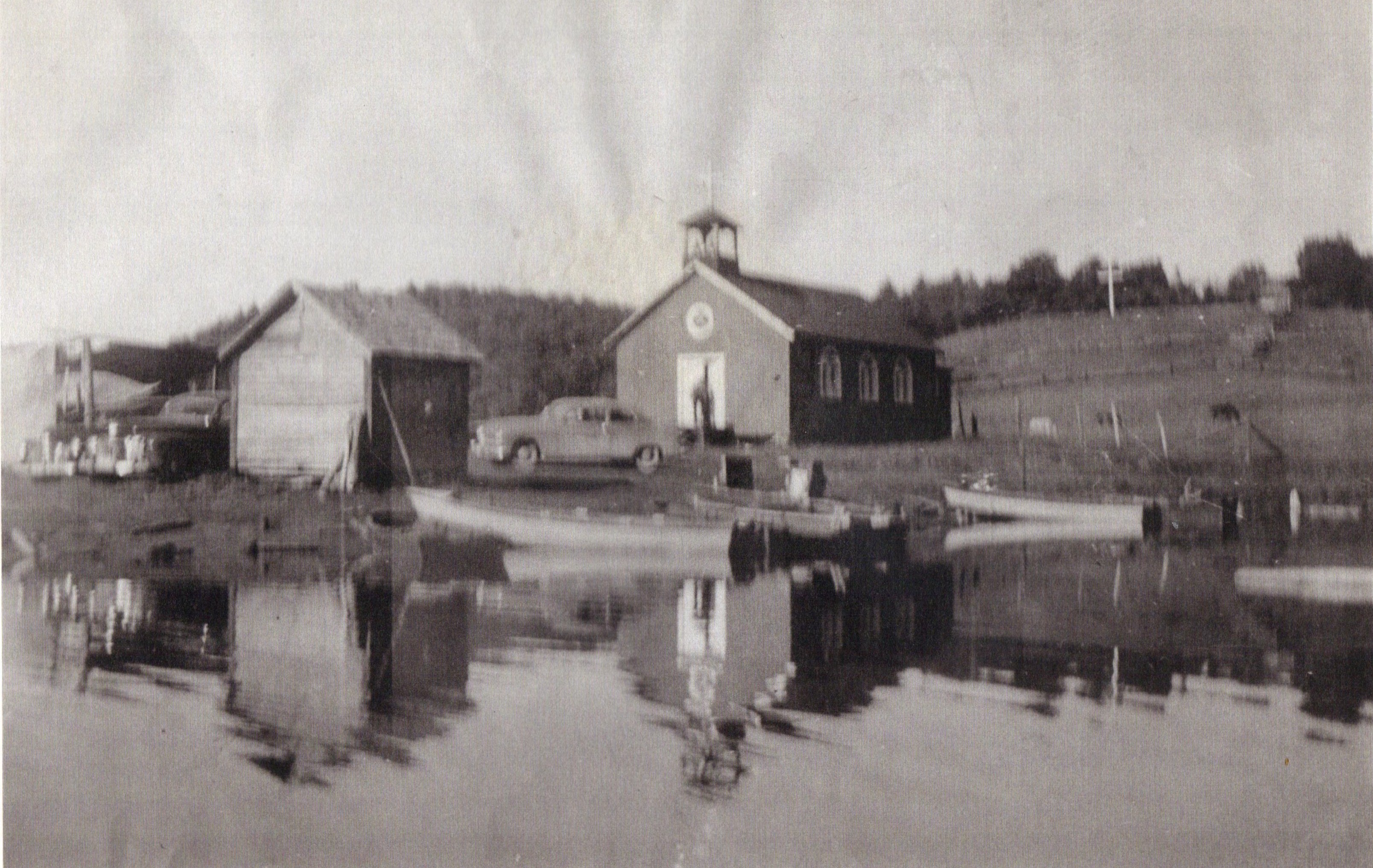 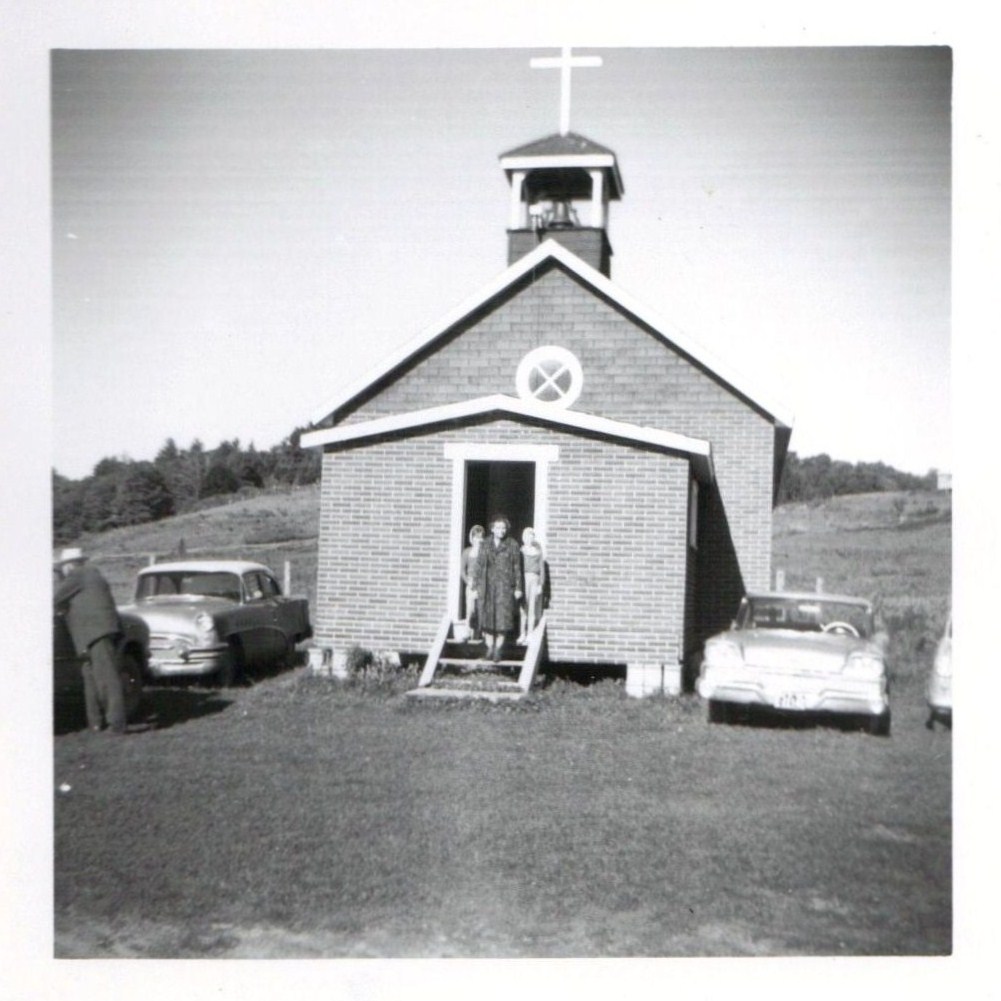 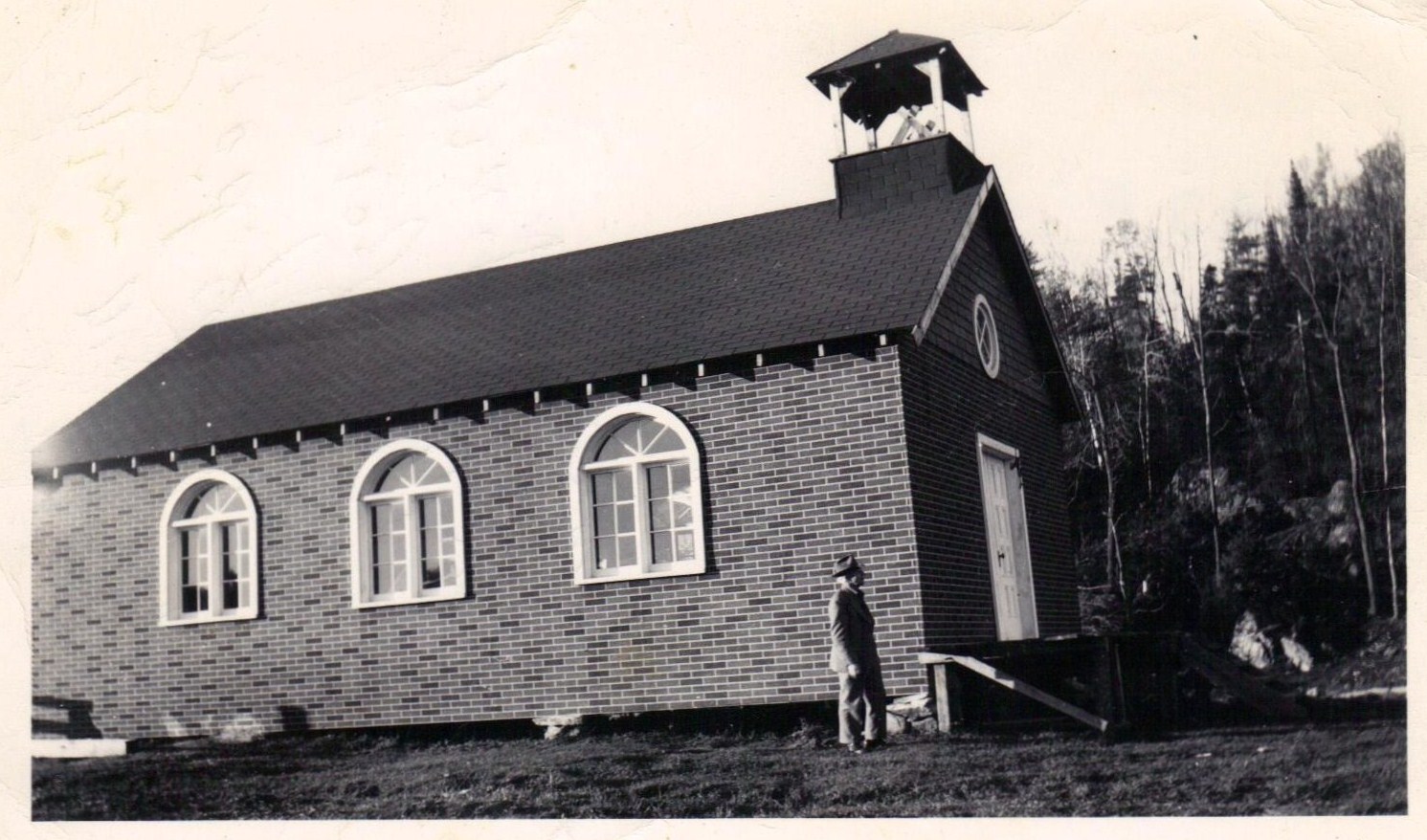 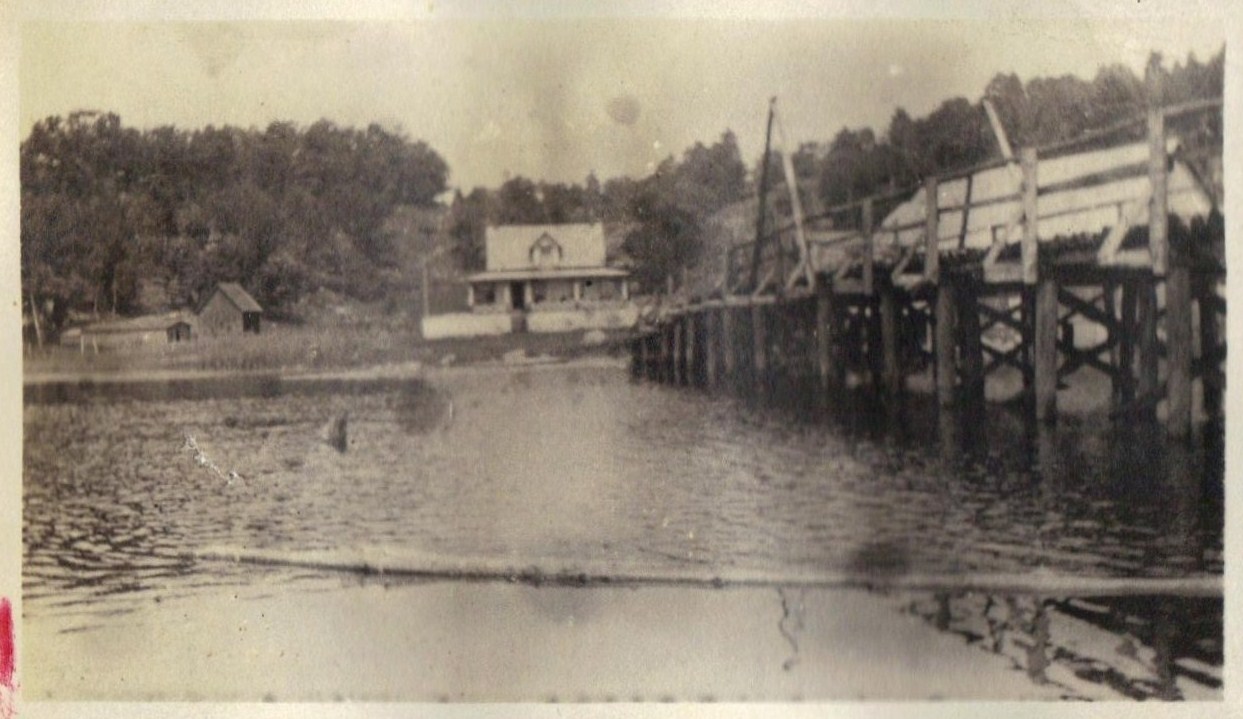 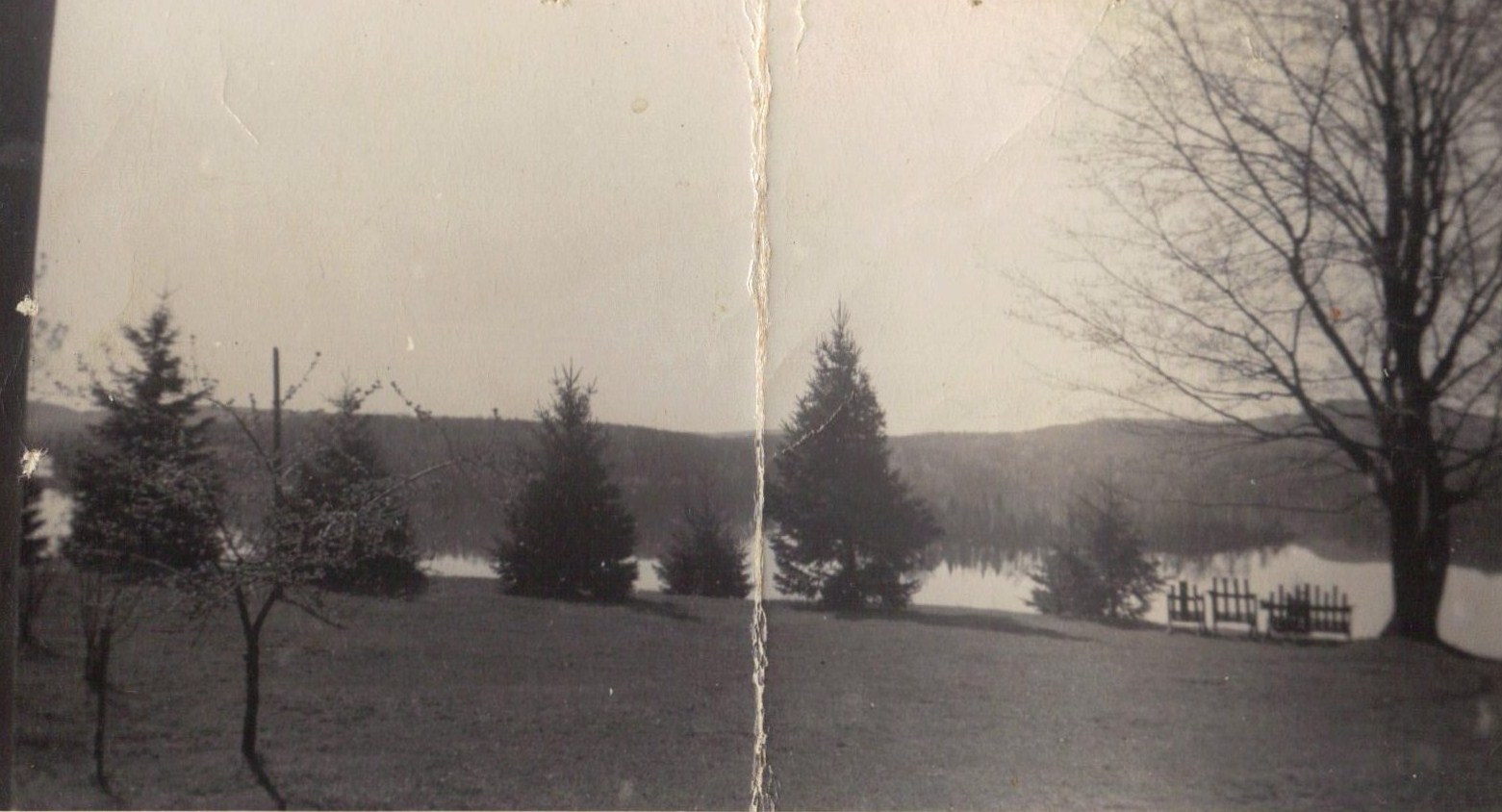 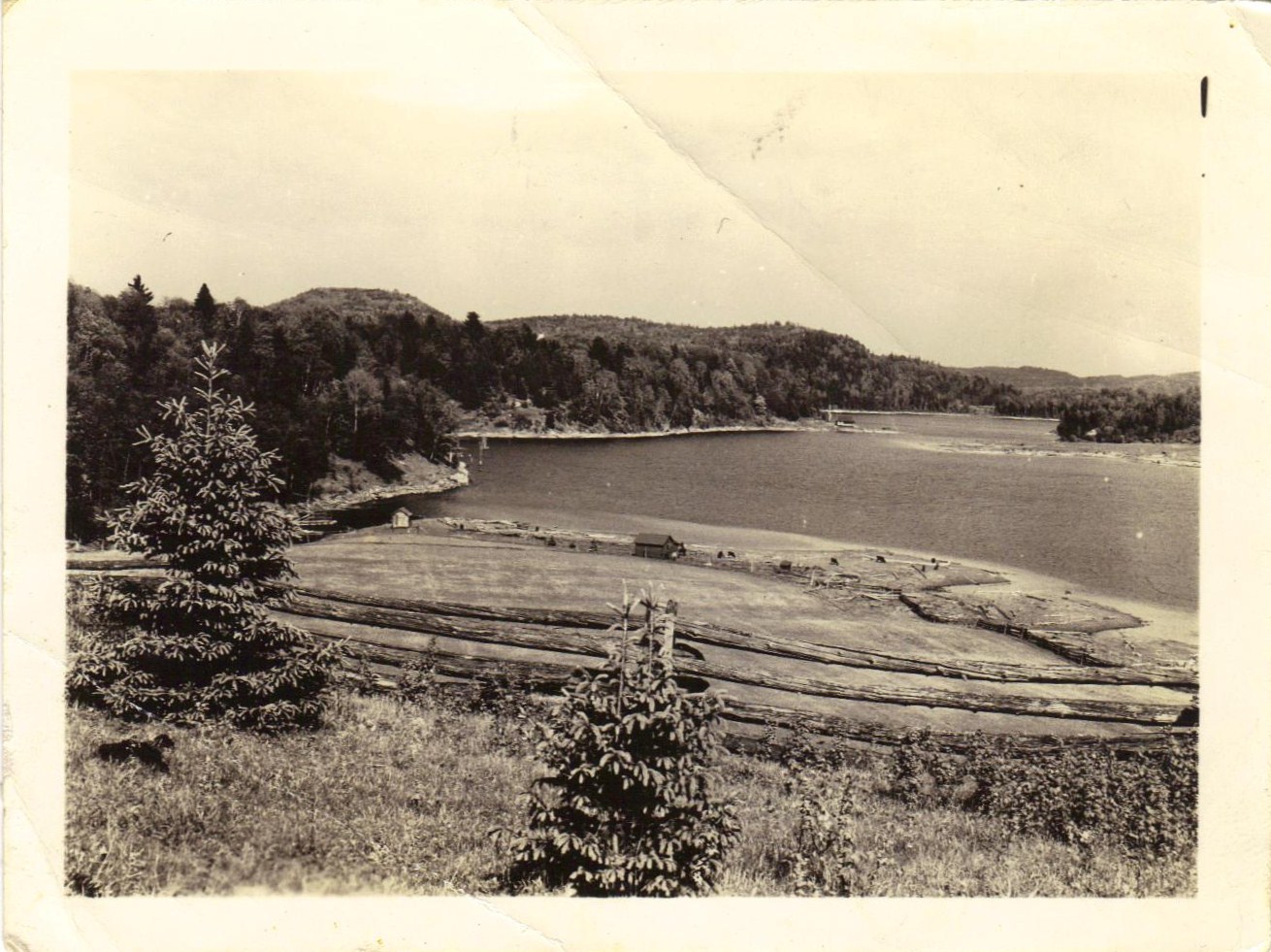 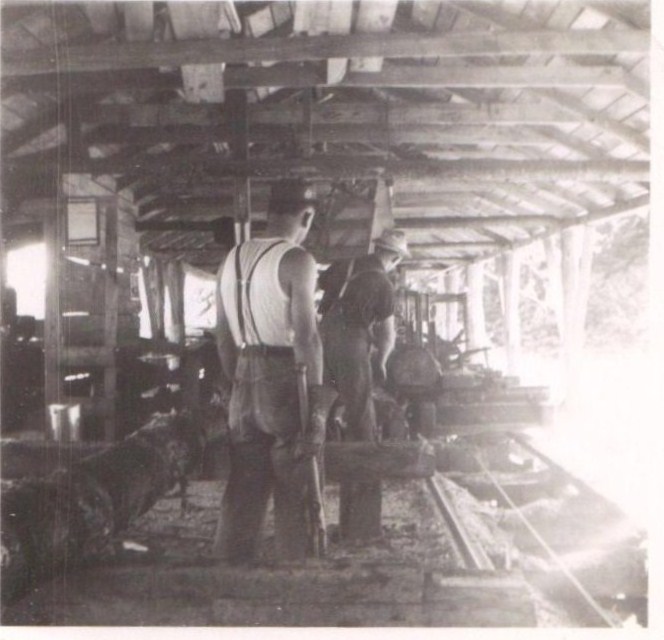 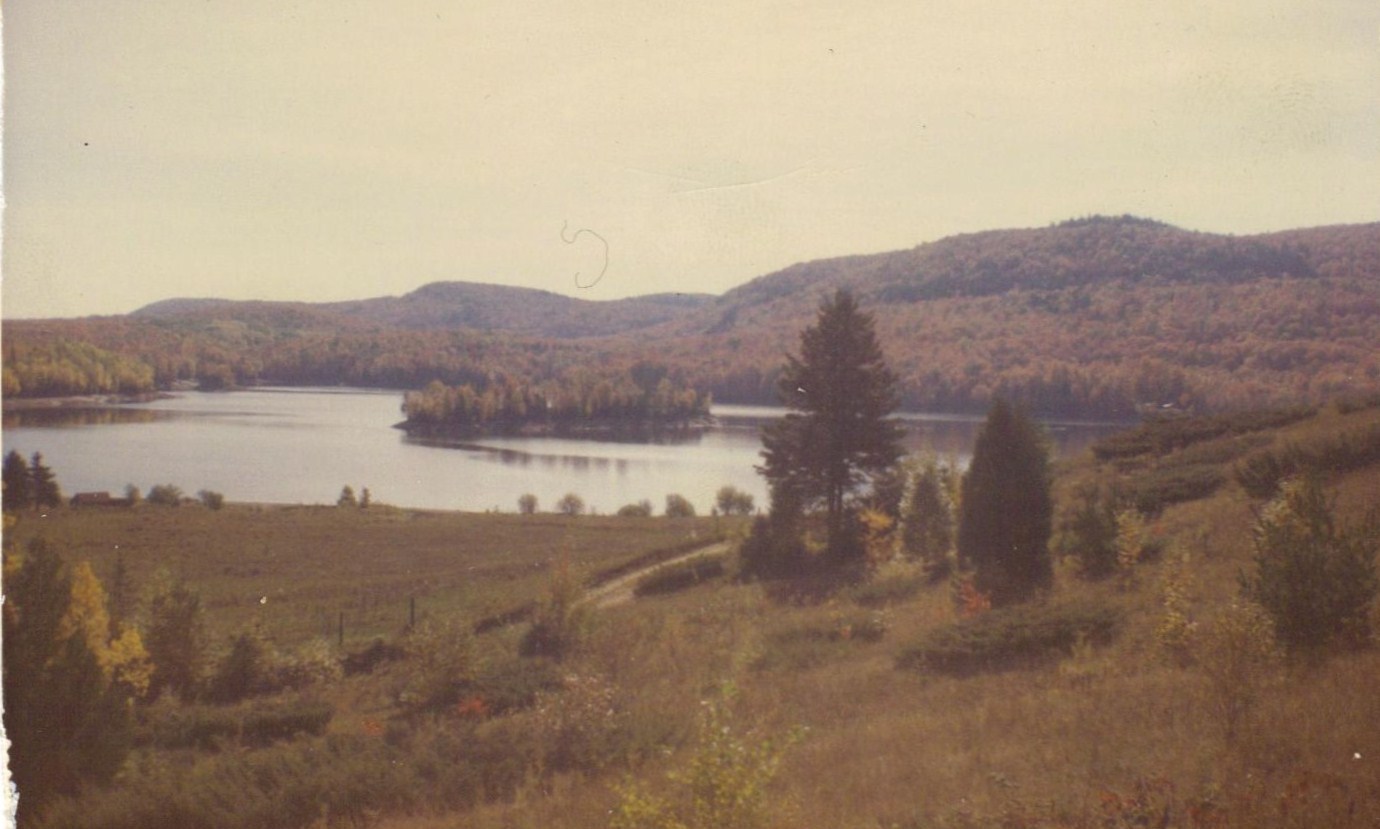 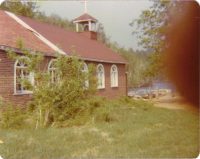 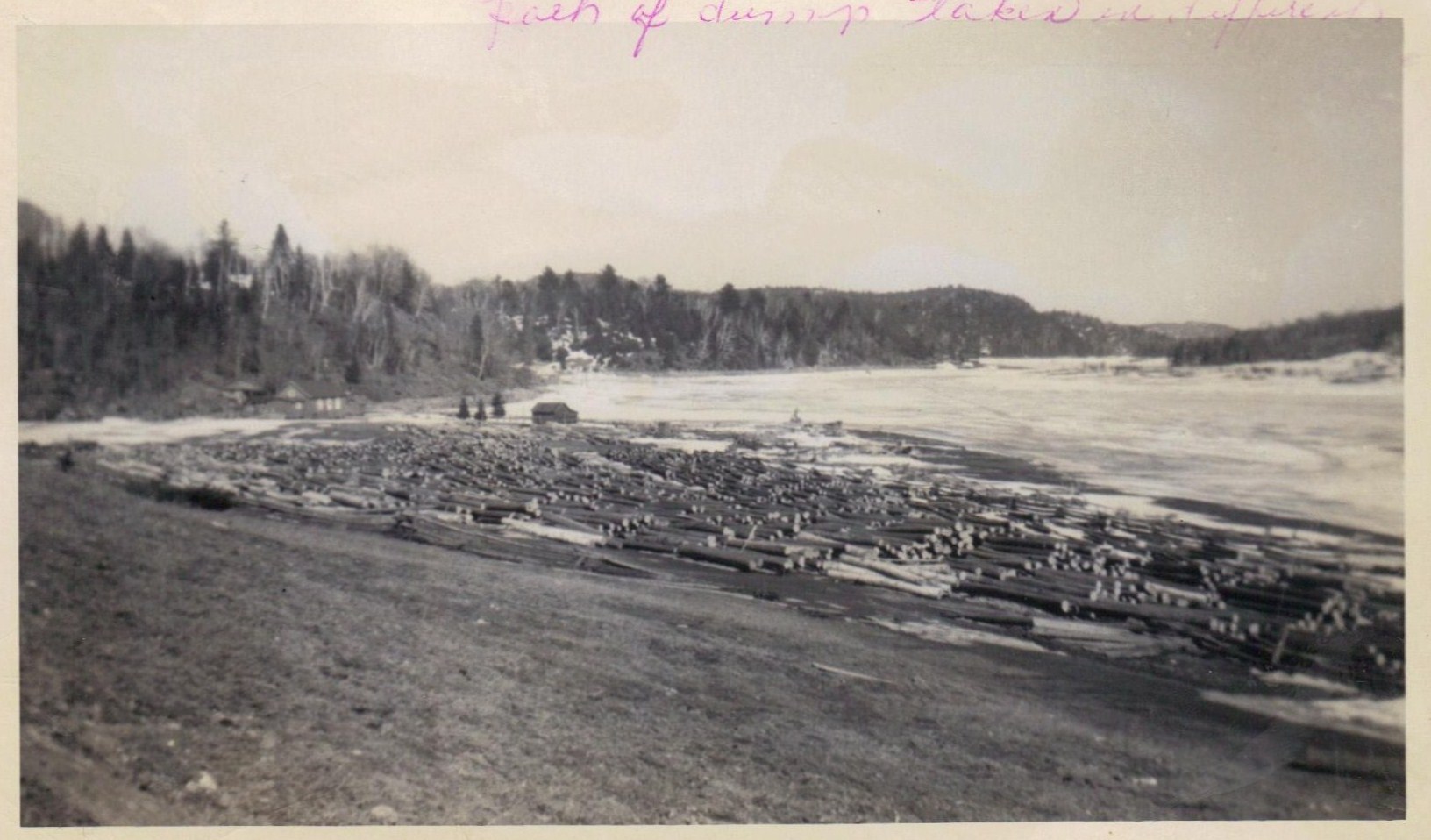 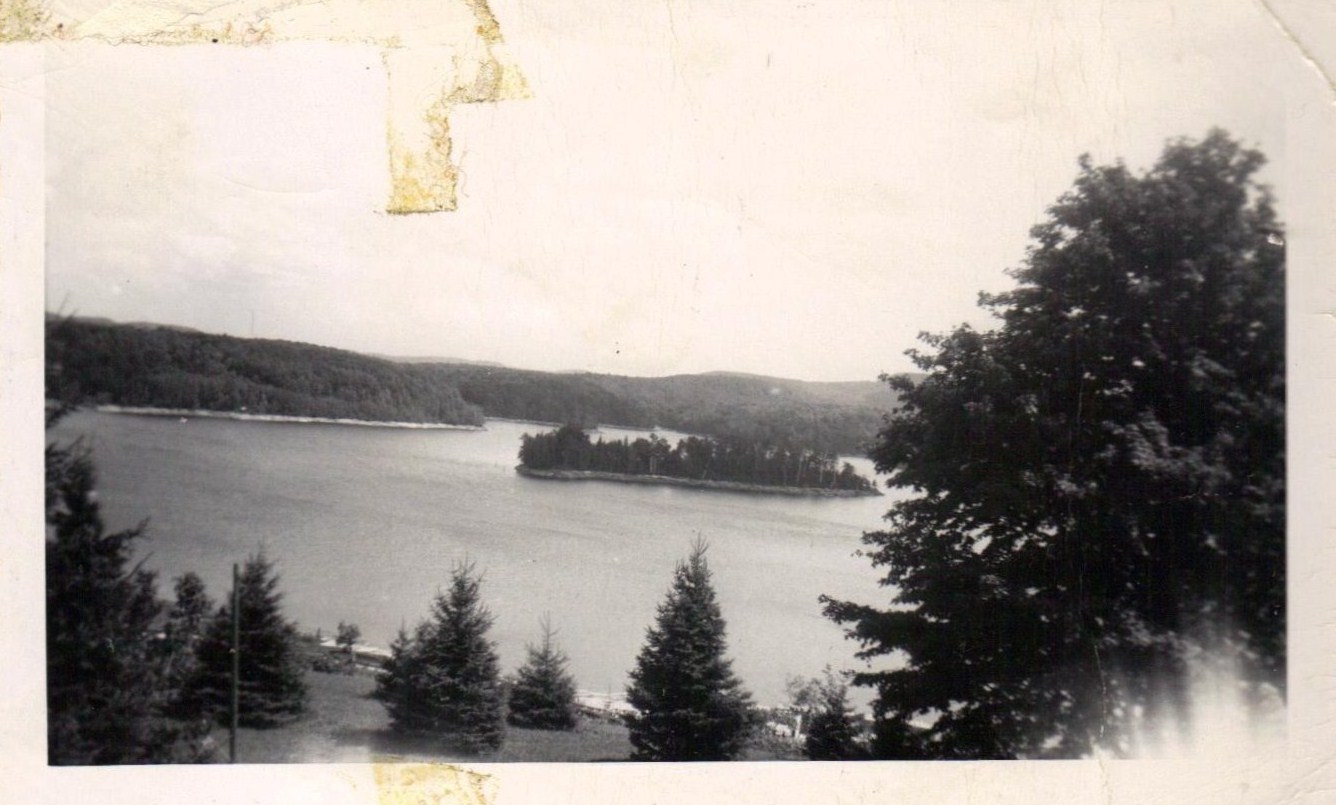 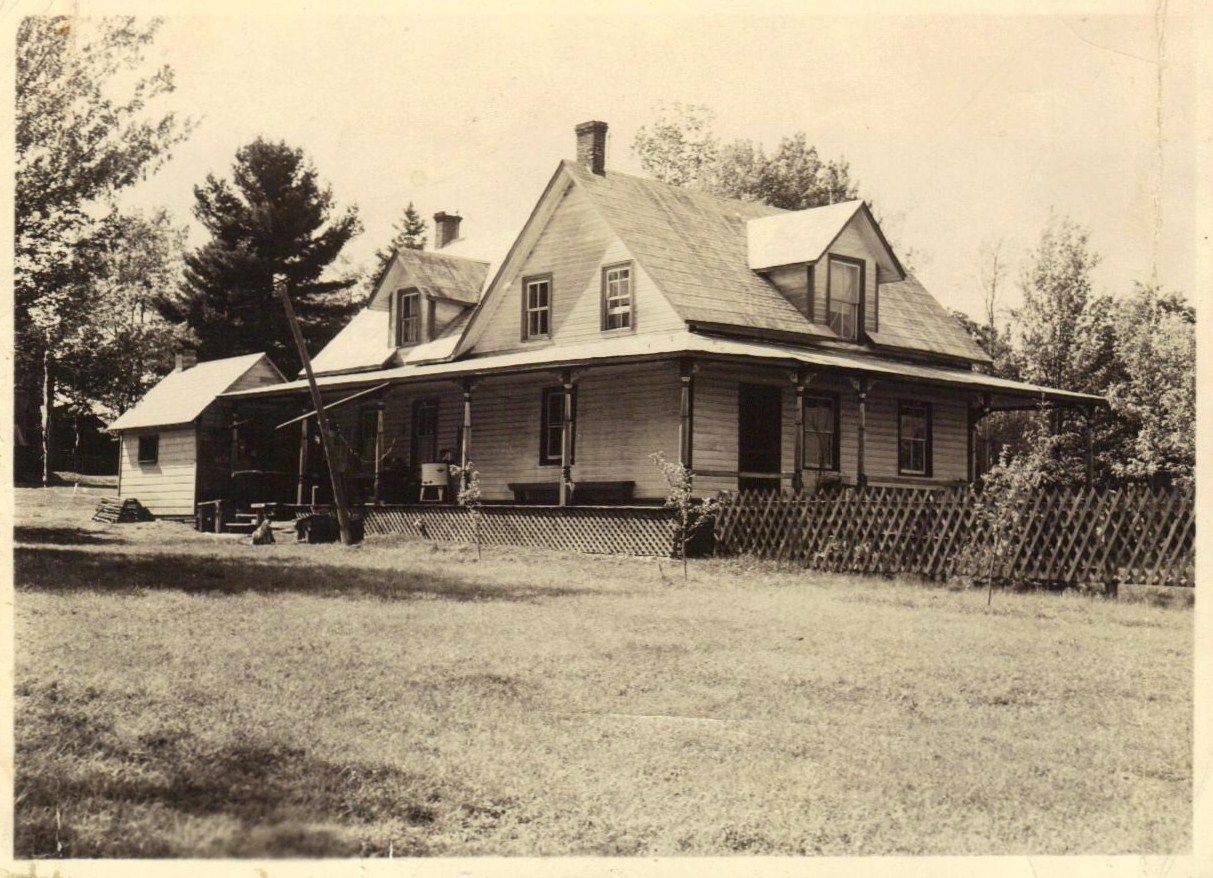 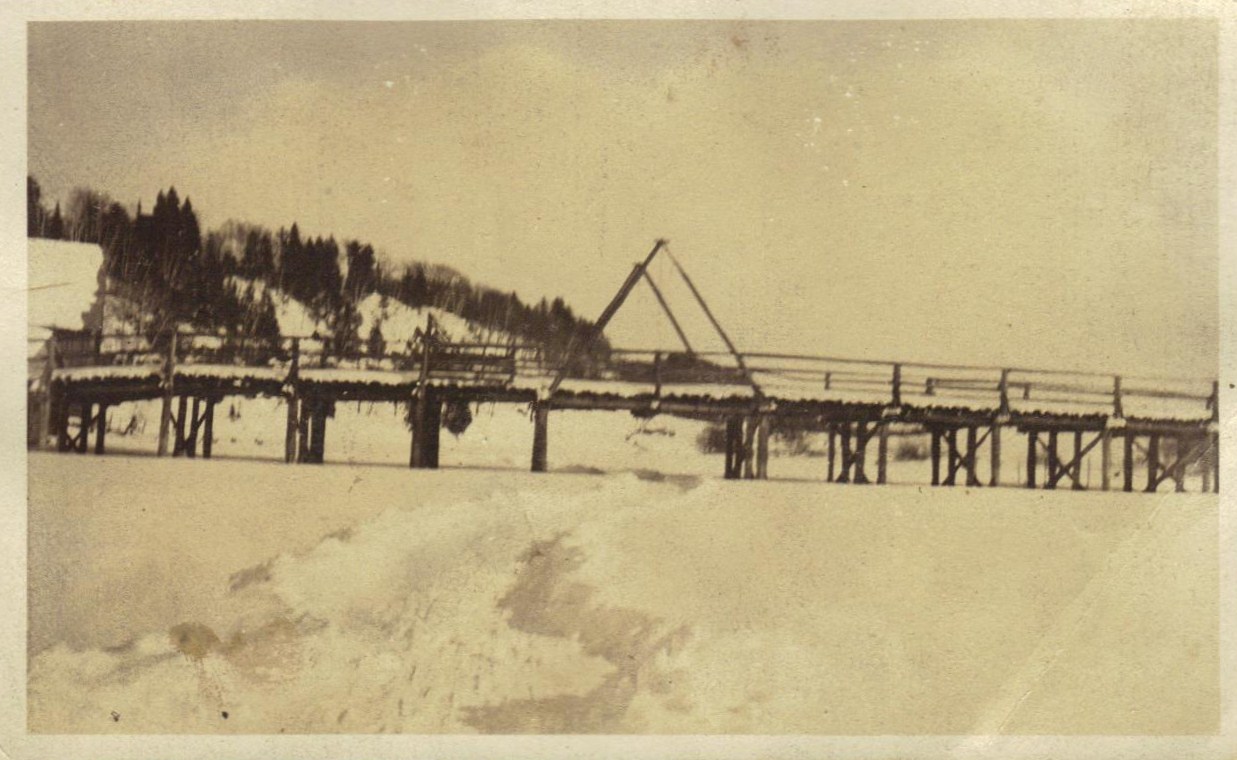 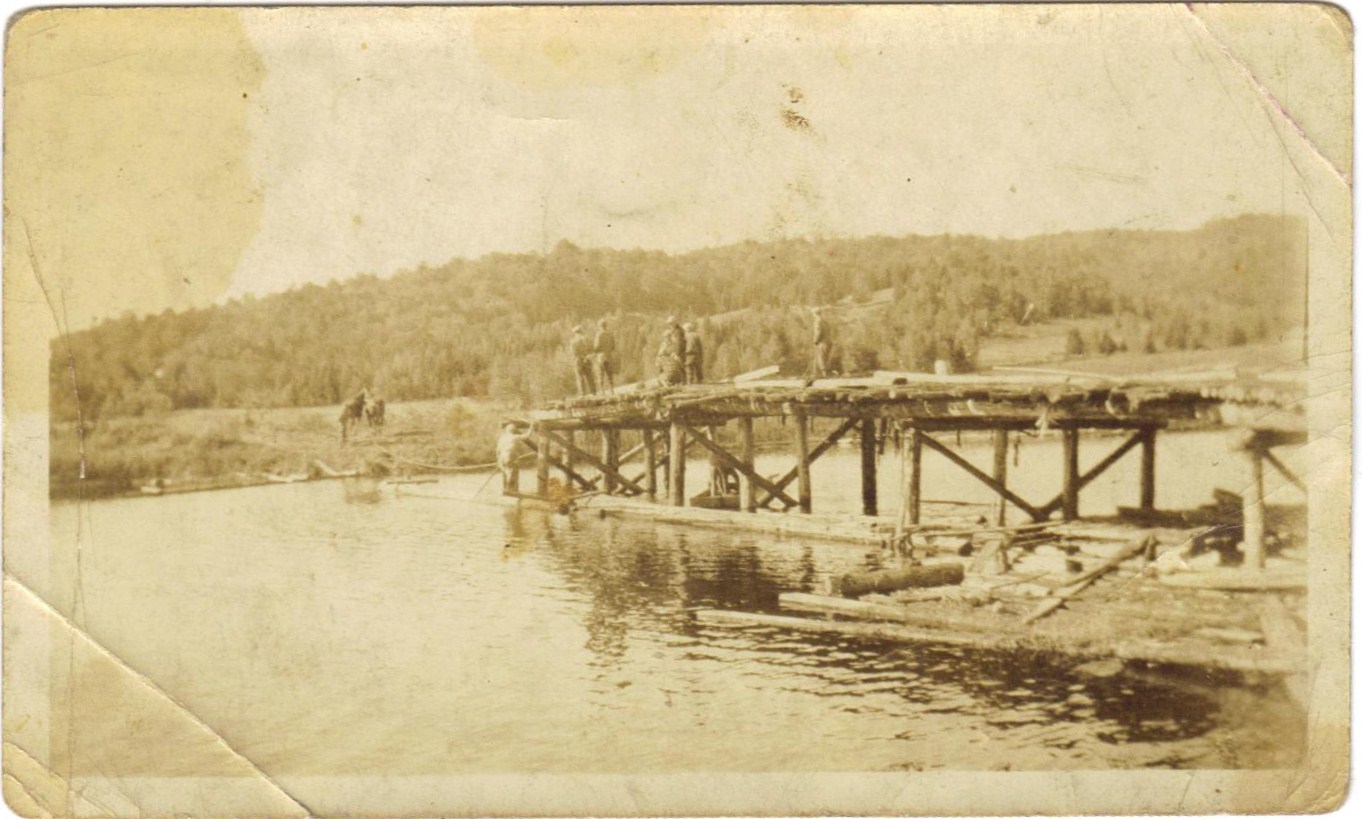 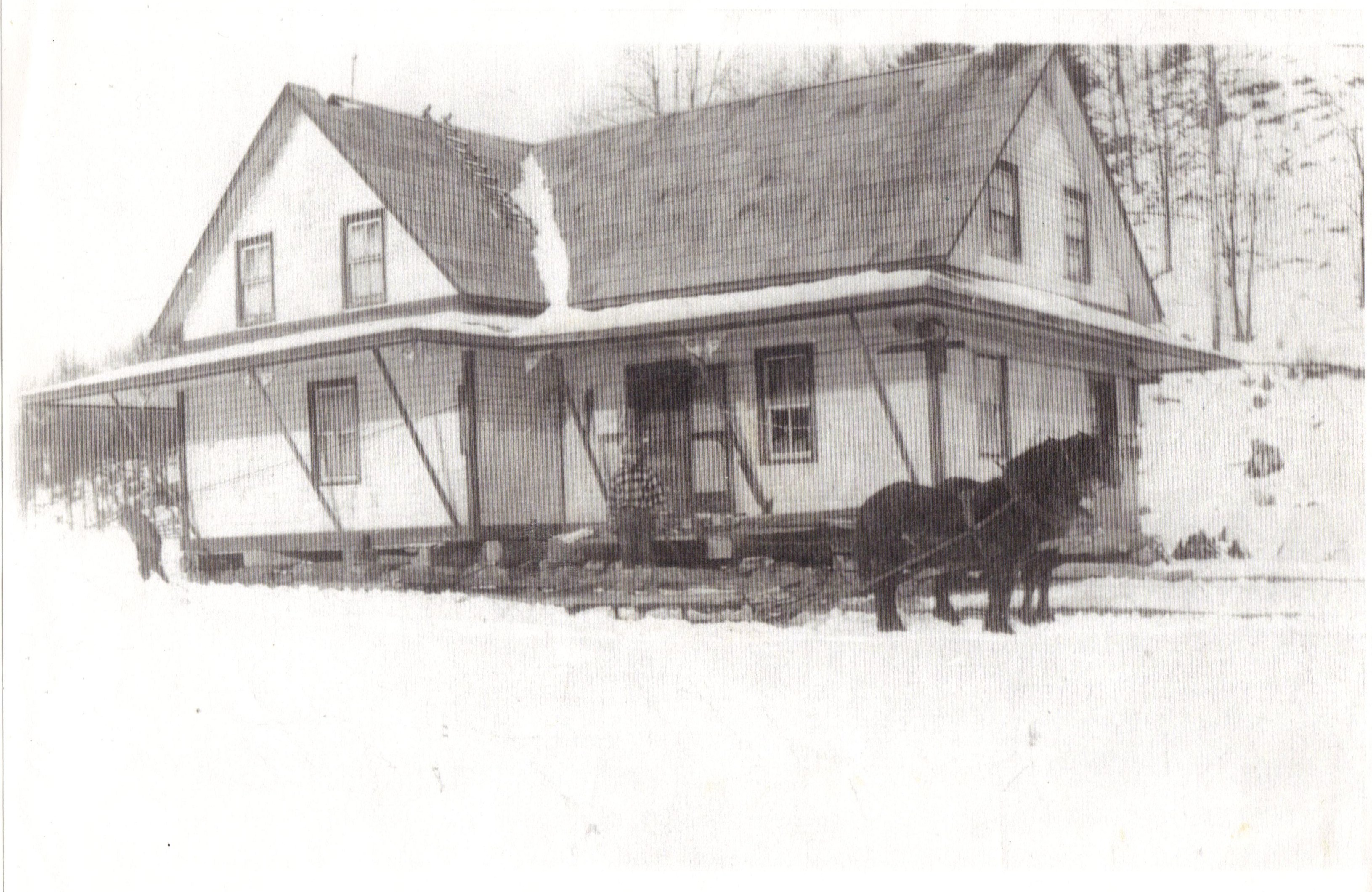 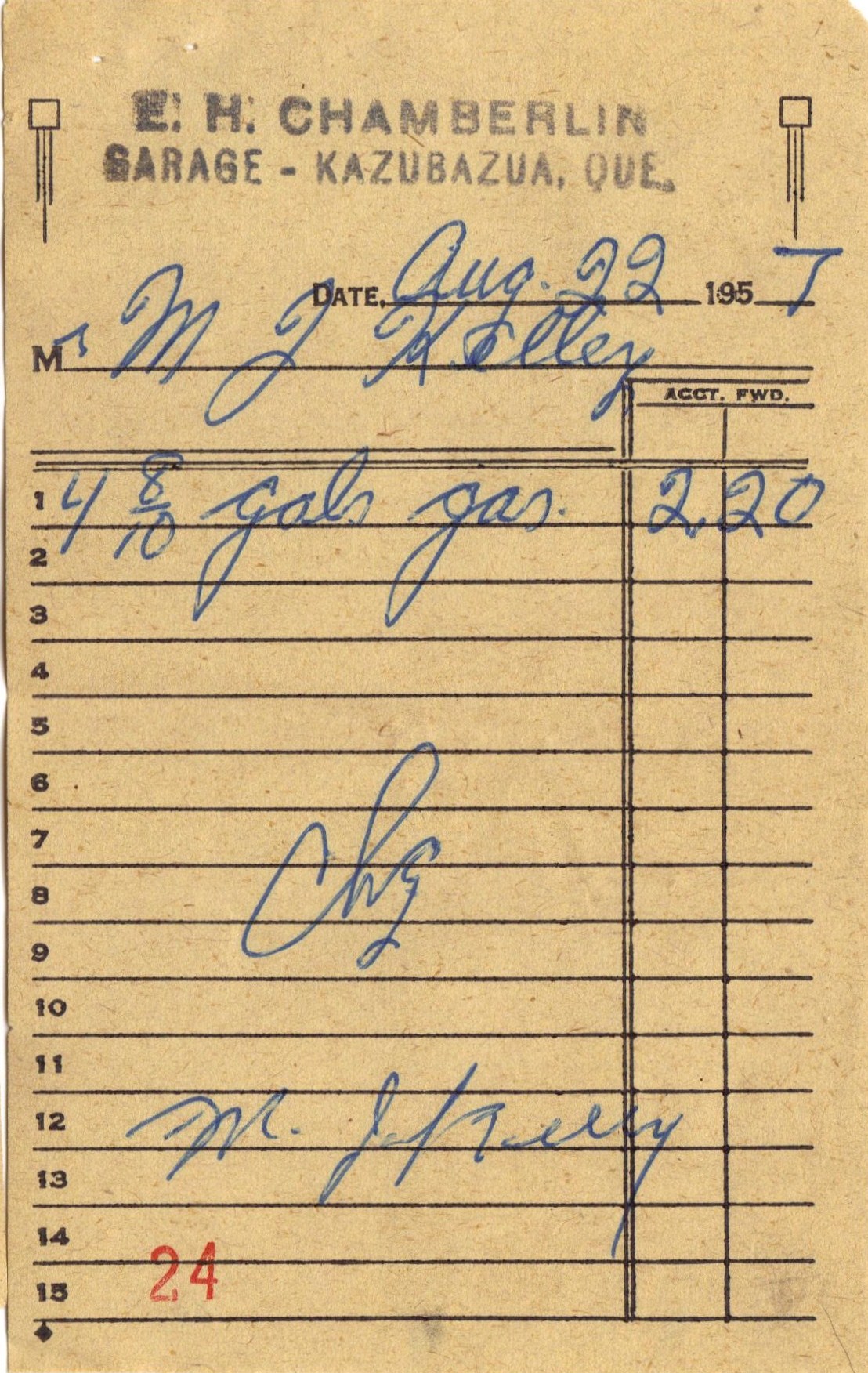 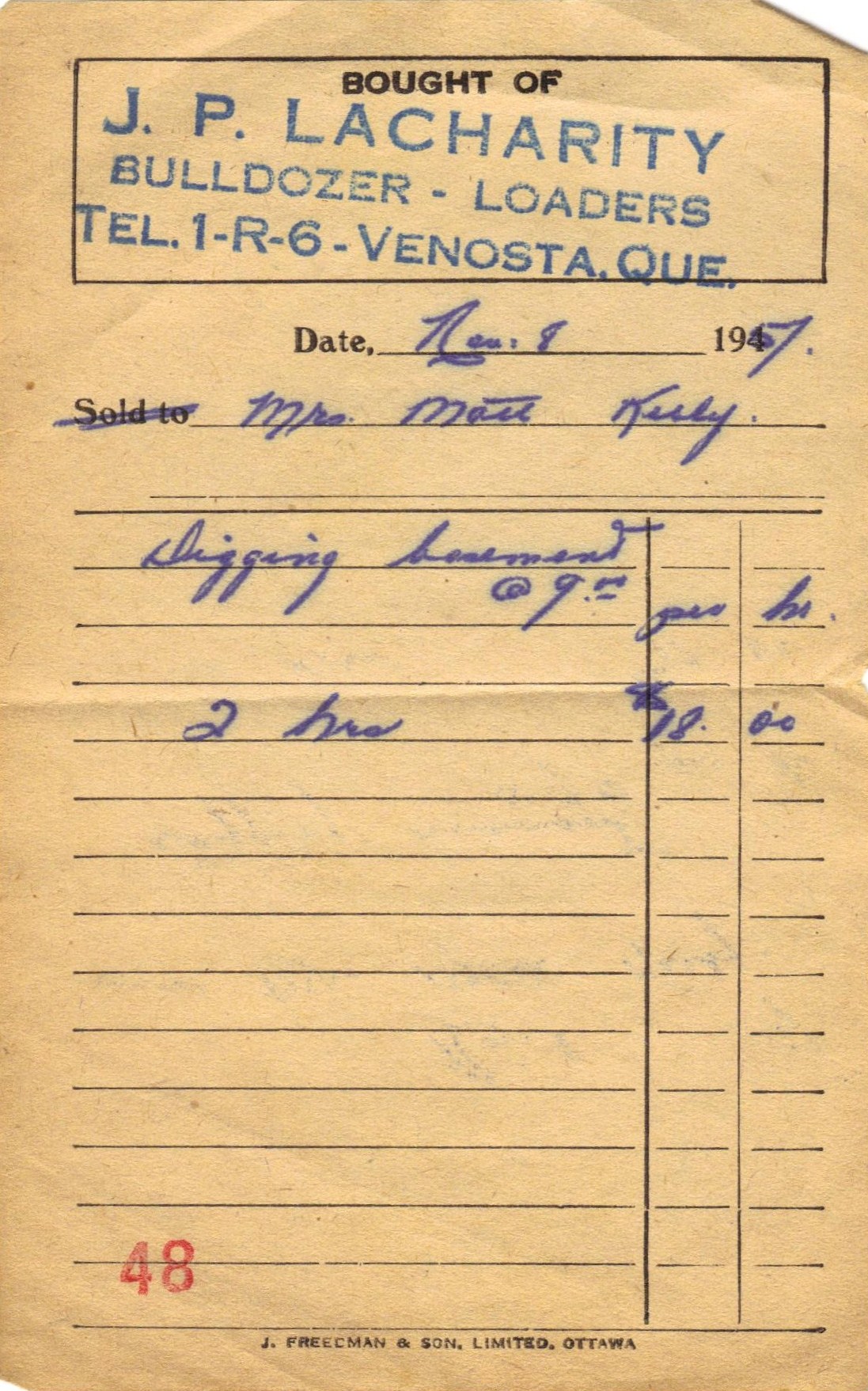 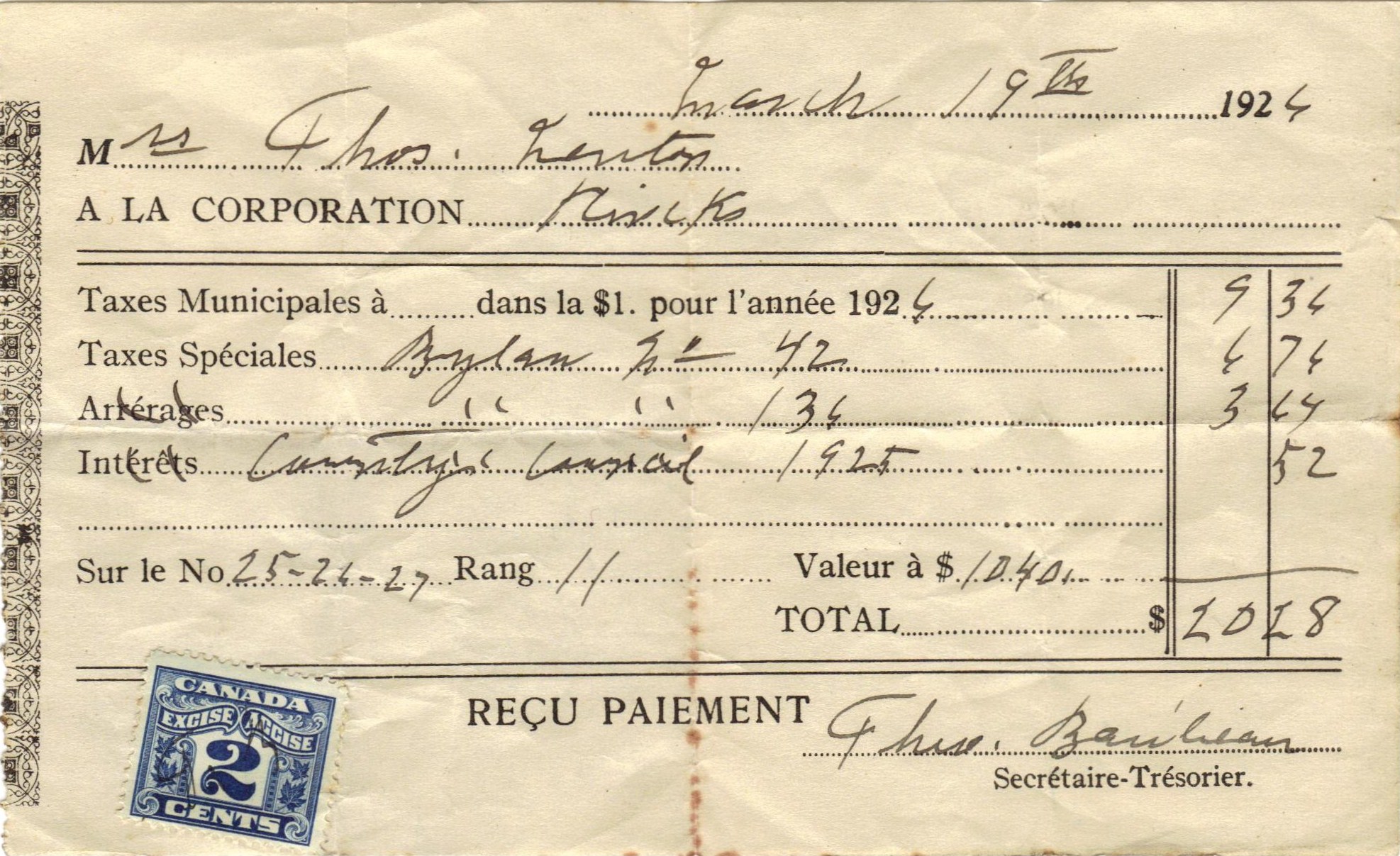 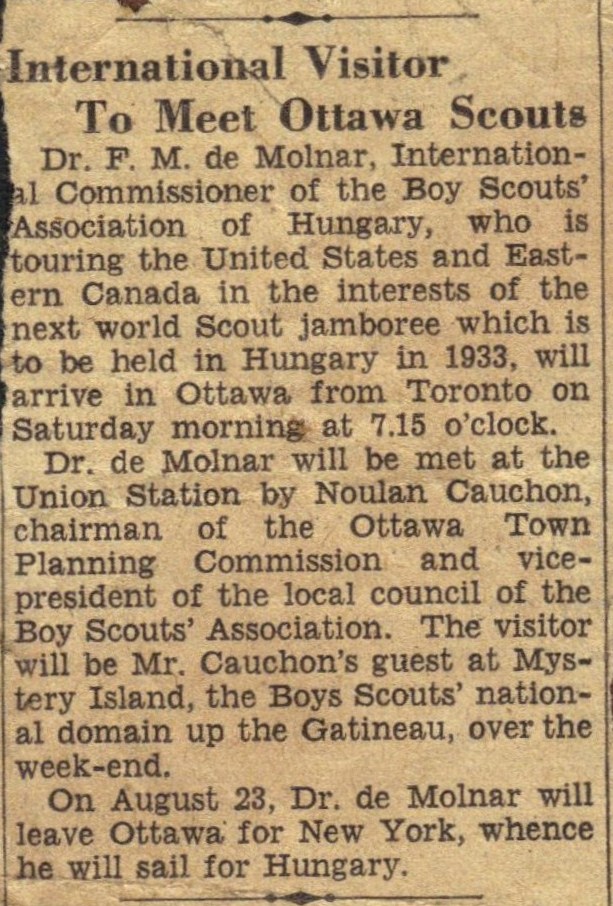 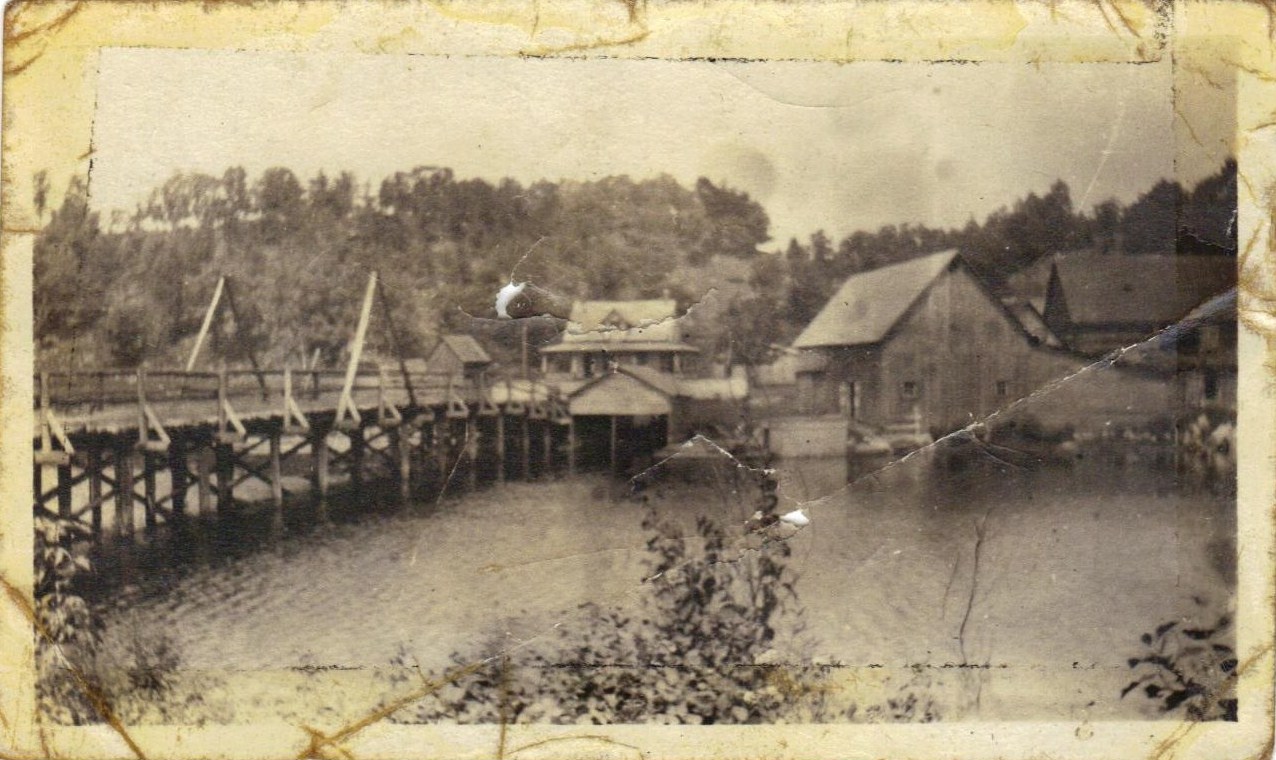 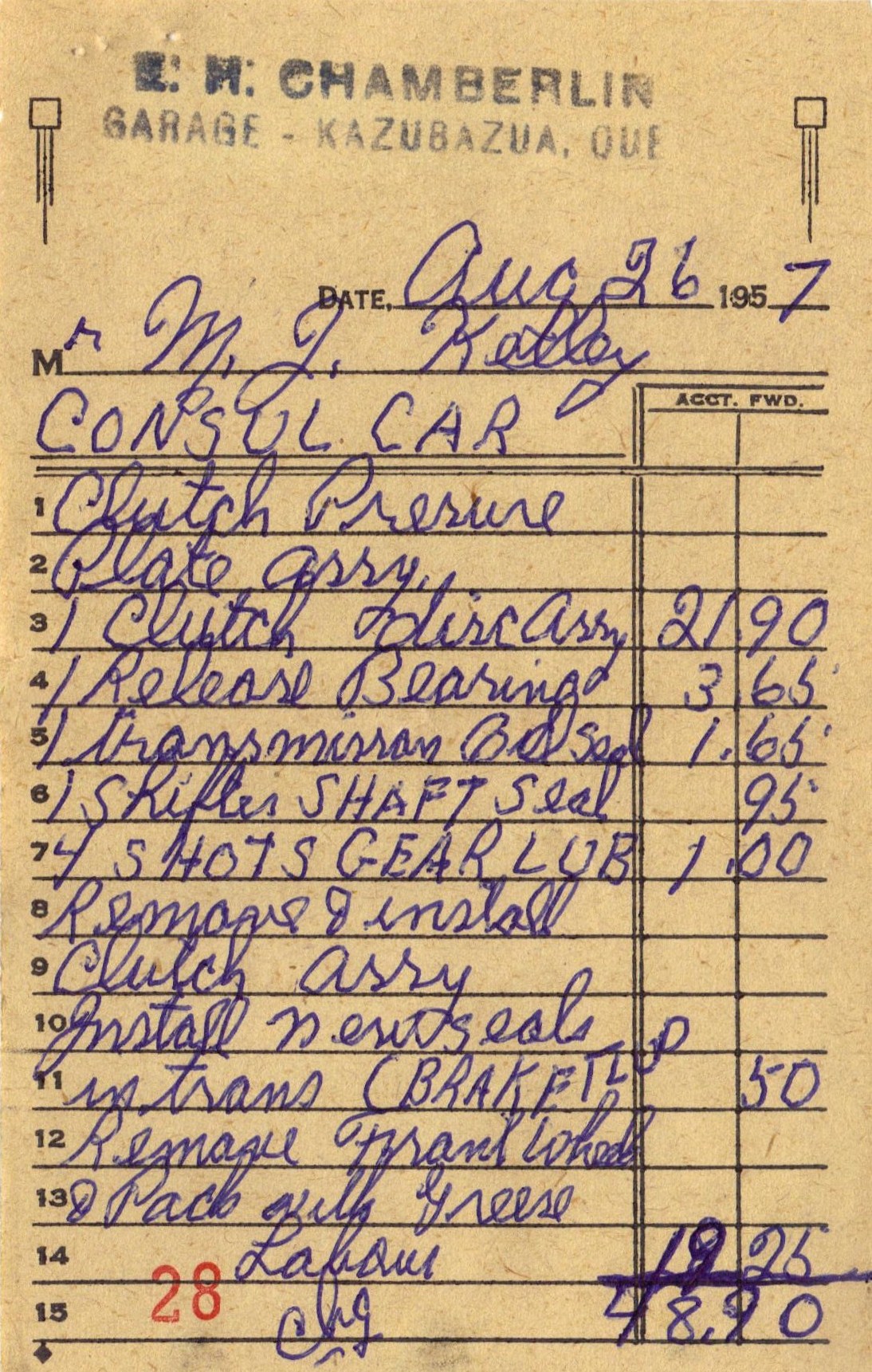 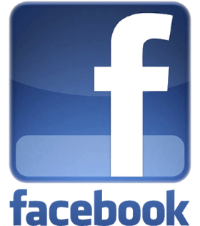